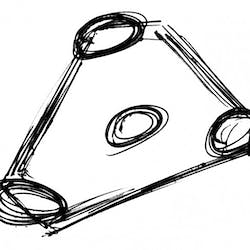 Composer for documentary on The Rocketeer creator Dave Stevens

Paul is the composer of the upcoming official feature documentary about the life and art of the creator of The Rocketeer — Dave Stevens: Drawn To Perfection.

Dave Stevens created The Rocketeer and reintroduced the world to 1950s pin-up model Bettie Page. While carving out his own unique corner of importance in comic book and illustration art, Dave showed the world what it's like to pursue the life of a creative individual.

San Diego Comic-Con 2022 (July 21-24) is full of Dave Stevens celebrations—including the premiere screening of Dave Stevens: Drawn To Perfection—as this year marks the 40th anniversary of The Rocketeer's comic-book debut:

And below is some surreal synchronicity... back on April 22, 2017, Paul's original artwork was at Creature Features' Los Angeles exhibition celebrating the 35th anniversary of The Rocketeer. Five years later, almost to the day, he began writing the first notes of music for the film.

The festival runs from August 11-20, and Hidden Valley Place will be back on the big screen at the legendary TCL Chinese Theatre in Hollywood, California. This marks the second time the thriller has been officially curated for a screening at this historic cinema. Dates and times for Hidden Valley Place's screening will be announced on social media soon.

The complete 18-track Hidden Valley Place (Original Soundtrack) is out now—composed and produced by Paul Terry, mixed by Emmy and two-time Grammy Award winner Sam Okell (The Beatles: Get Back, The Lost Daughter), and mastered by award-winning mastering engineer Alex Wharton (Radiohead, Pixies) at Abbey Road Studios, with cover art by AD Allegretti.

The is also a Special Edition on Bandcamp which comes with an exclusive 32-page digital booklet, featuring a foreword by director Bartley Taylor, composer production notes, behind-the-scenes photos, promo art, stills from the film, and more.

Here is a collection of the latest press reactions and reviews for the soundtrack:

Co-authored by Tara Bennett & Paul Terry—with a foreword by Kevin Feige (President of Marvel Studios and Chief Creative Officer of Marvel) and an afterword by Robert Downey Jr. (Tony Stark/Iron Man)—the bestseller The Story of Marvel Studios: The Making of the Marvel Cinematic Universe has just passed 1,000 ratings on Amazon and is a five-star book.

Thank you for the ongoing support of all these projects. Until next time, enjoy a stroll around these websites...